Golf fans rejoice! After a 9 year hiatus, golf trading cards are back on the shelves. Unless you follow the sport closely, you might not have even realized they were gone.

The last golf-exclusive release came out in 2014. Back then it was regarded as a lower-tier product; a fun collectible for fans of the sport, but not a product with much mass appeal.

But this time around things could be different – golf now has a top 10 global fan base, and GolfDigest called 2021 “the year of resurgence” for the sport after post-pandemic surges in popularity.

With golf cards back in production and the sport as popular as ever, there’s been some buzz in the hobby. So, we decided to give you the lowdown. We’ll cover everything from the 3 new releases, to the best vintage cards to invest in.

Upper Deck has been the biggest name in golf for the past few decades. In the fall of 2020, they announced their plan to release 3 new golf products in 2021. The products’ release dates endured countless pushbacks, but alas, now, in the summer of 2022, all of the PGA products are finally here.

Artifacts was the first of the three products to drop, hitting the shelves in August of 2021. It’s golf’s flagship product, and sealed hobby boxes go for north of $1,000 on eBay.

All of the autos are on-card, and the PGA fans have raved about cool memorabilia cards that feature everything from hat patches to game-worn golf balls.

SP Game Used puts an emphasis on, you guessed it, game-used products.

This is Upper Deck’s top-of-the-line gold product. There are only 5 cards in each box and boxes sell for over $300. To spare you the math, that averages out to $80 a card.

This is a product for collectors who want to skip the fluff and cut right to the chase. About 50% of the cards in this product are memorabilia hits, and even the base set is chock-full of rookies. The checklist is 25 vets and 25 rookies.

This was the last of the three golf products to be released. It’s unclear if Upper Deck had delays in distribution or if they were slow getting all the cards autographed. However, it’s clear that these cards were made a while ago – golfer stats only go up to 2019.

SP Authentic is golf’s most affordable product. Boxes were initially listed at around $500, but prices have dropped considerably over the months since its release. It’s now selling for around $300, and many expect that price to continue to drop.

The lack of interest isn’t a great sign for its investment potential, but if the price gets low enough, it should be a fun rip for golf collectors who’ve been craving a product for close to a decade.

SP Authentic comes with 4 cards in every pack, and boxes come with 18 packs for 72 cards total. Parallels include Veterans, Legends, and Tier 1, 2, and 3 rookies. Odds of hitting range from 1:24 up to 1:288, depending on the card.

On average, each box will have 2 autos, 1 of the subset FX bounty parallels, and 14 other inserts.

Numbered to #299, this DeChambeau rookie is a big hit from
the SP Authentic Checklist

Despite a lot of the excitement surrounding golf’s reboot, there is one glaring question fans have been asking: what’s up with the lack of current stars?

The checklist for the SP authentic only included 6 of the top 50 players in the world. Yes, I’ll say that again… 6! Imagine a basketball or football product that only had 6 top players. It would be laughed out of production.

So why are so few of the top players featured? Well, it comes down to licensing issues. Players on the PGA tour are technically independent contractors. Their likeness doesn’t belong to their league, so Upper Deck actually had to secure the license with each player individually.

Clearly, that wasn’t easy to do, because 6 of the top 50 is pretty abysmal.

So what does this mean for the long-term viability of the product? Well, the optimist in me says that it will drive the value up for those current 6 players. When you pull a Colin Morikawa (world #8) you know that it’s that much more valuable due to scarcity.

The pessimist in me, however, is worried that the lack of current star power (and over-reliance on vets like Tiger Woods and Jack Niklaus) is going to cause collectors to lose interest. Missing those big names might be what has caused the SP authentic prices to drop so much. If interest remains low, Upper Deck might not have any interest in more golf product going forward.

So, what’s the deal with LIV Cards?

The world of golf looks a little different than the last time we had a product on the market. Most notably, there is a new professional tour entirely separate from the PGA that has stolen a few of the biggest names in the sport.

The LIV Tour is an international golf series that officially launched in June of this year and has paid out some eye-popping contracts to lure some of golf’s biggest names away from the PGA. Phil Mickelson is undoubtedly the biggest name to join the LIV tour (backed up by his rumored $200 million contract), and guys like Sergio Garcia and Brooks Koepka have joined as well.

Well, if you were hoping to see any of those guys in the upcoming Upper Deck product you’re out of luck; not only are the Upper Deck releases sticking to PGA players only, but things have gotten so contentious between the two leagues that the PGA has banned all LIV players from ever rejoining the tour.

For now, there are no plans to release cards featuring LIV tour players. But if the tour continues to grow, it could be a possibility down the line.

A brief history of golf cards

Golf cards have been around since the 1800s, but they’ve gone through quite a long evolution over the past century. Here’s a rundown of the last 130 years of golf cards.

In the late 1800s, cardboard cards – which featured images of everything from sports to national flags, to entertainment – were placed in tobacco packages as a fun way to give structure to the package itself.

Those familiar with the hobby know these relics as “tobacco cards.” Golf was one of the most popular sports in the world at the turn of the 20th century, and therefore quite a few cards showcasing these golfers were produced. However, despite these big print numbers, natural attrition has rendered complete sets from 1898-1930 virtually non-existent.

After World War Two, golf cards, and sports card production, in general, began to more closely resemble the hobby as it is today. While there weren’t any products in the 1950s-70s that were dedicated exclusively to golf, the biggest stars could be found in the multi-sport packs, such as this Ben Hogan Topps card from 1954. 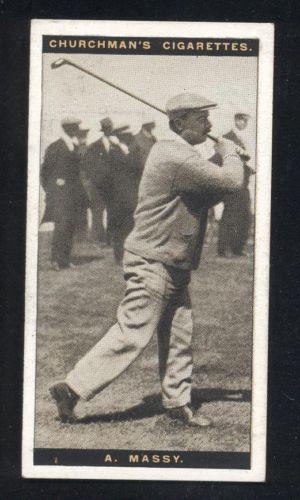 By the 1980’s we started to see some of the first formal golf releases of the modern era. Donruss Golf 1982 is a popular set that includes a highly coveted Jack Nicklaus rookie card.

By the 90s we were getting golf exclusive products from major brands like Upper Deck, but they weren’t consistent. Instead, they were typically released every 3-5 years when there were enough new golfers to make a different product worth it.

However, a new manufacturer emerged to fill in the annual release void: Sports Illustrated for Kids. While this might sound gimmicky, true golf collectors know the value these cards have in the hobby. “Still-in-magazine” Tiger rookie cards can fetch prices of $10,000 plus on eBay.

Most popular golf cards in 2022

Despite the long and rich history of golf cards, there’s still a single player who is sought after more than every other player combined: Tiger Woods.

Like Michael Phelps in swimming and Usain Bolt in Track, Tiger Woods’ name has become synonymous with his sport in the 21st century. This popularity bears out in the marketplace as well, as a majority of the most valuable cards in the sport belong to Mr. Woods.

That said, a few older players have cards that make the cut. Here’s a list of the 5 most sought-after cards in golf:

It’s not a stretch to call this the single most popular golf card in the hobby. It’s Tiger’s premier rookie card, with a picture of him, pointing at the ball, caught in an iconic celebratory pose.

While there’s no auto, parallel, or short print run to make this card more valuable, high-graded versions of this card still go for $2,000 or more.

If you’re a fan of Tiger or golf in general, this is the type of card you should build your collection around.

You can find tons of Tiger Woods 2001 Upper Deck rookie cards like this on eBay.

If the Upper Deck RC is Tiger’s most iconic card, the SP Authentic has a claim to being his most valuable card. Featuring an on-card auto and a limited print run of 900, this card has those marks of exclusivity that can shoot gem versions into 5-figure territory.

The card itself is nearly perfect: the auto is placed front and center, the image features a locked in Tiger tracking a chip onto the green, and the design doesn’t feel messy or cluttered. Aesthetically, this is probably my favorite Tiger card ever.

You will have to pay, but you can get the 2001 SP Authentic Tiger Woods on ebay

If you’re looking for some of golf’s classic cards that don’t belong to Tiger, this 1981 Nicklaus rookie is top of the list.

While it doesn’t have a low print run (keeping it from the upper echelons of value) there are many that have been autographed by Nicklaus. The signature tends to look a little different than what we see on most modern cards.

While the auto makes the card look more cluttered, it adds an old-school look that’s a plus for some collectors. A certified Nicklaus auto on the card can also fetch some high dollar amounts.

As we mentioned earlier, the SI for Kids Tiger rookie is one of the top cards in the game.

Most of the hype for this card has to do with it being considered Tiger’s “real” rookie card. Because of the gaps in production from Upper Deck, this card was the first rookie that was very mass distributed.

While the card itself is flimsy and its design is unremarkable, here, you’re paying for the novelty. This card hit peak popularity in the 90’s, where the magazine itself was selling for over $10,000, and one Tiger card actually set the record for most expensive sale at the time ($125,000).

On ebay, you can find both the original magazine and the 1996 Tiger Woods rookie card

Arnold is another legend of the game, and his rookie card from Bancroft Tiddlers is an absolute must for golf collectors.

This card predates the modern era of cards. It was released in the “Giants of Sport” collection that featured athletes from a number of different sports. As with most cards of this era, the front was painted by an artist. It’s a dual image that features Arnold’s portrait alongside his swing in motion.

The back is a straightforward write-up of his career accomplishments and earnings.

This card should appeal to any golf fan, or collector of vintage memorabilia.

Find a 1965 Arnold Palmer from Bancroft Tiddlers on eBay

Bottom line on the comeback of golf trading cards

Golf cards are back! Upper Deck has released 3 products over the past year, and with the length of the hiatus, many of the players featured have never been in production before.

Despite licensing issues keeping many of the top players out of these releases, the excitement around the product has still been fairly high.

Right now golf seems to be a good long-term hold. The sport is rising in popularity, and prices for golf cards have been going up over the past few years. Whether it’s picking up new products, or investing in some classic cards, now is the time to get in on some golf.