The complete set is not a particularly sexy product, but it is a mainstay of baseball collecting and has been for years. Since base cards are a bit passe, Topps has made an effort to make them sexier in recent years. So how successful is the new set with its quest of keeping things fresh? Our 2022 Topps Baseball Factory Set review will answer all your questions.

Intro To The 2022 Topps Baseball Factory Set Review Of Formats

Look for a 2022 Topps Baseball Factory Set on eBay.

See how much they are going for on StockX.

Topps Series 1 and Series 2 both traditionally have extensive checklists. The Factory Set combines the two, so you can conveniently complete both. Topps first offered one of these in 1974 as an exclusive offer through the J.C. Penney catalog. Then, in 1982, the New York-based company began to release the Factory Set regularly.

It has long saved collectors the hard work of completing the base cards in the flagship set. But over the years, base cards have become a less important and valuable commodity. Instead, numbered cards, parallels, and autos have taken center stage. Unfortunately, these developments left the Topps Factory Set as an afterthought on the card shelves. 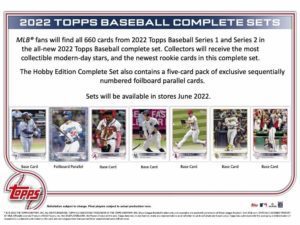 While the Factory Set is often called the “complete set,” which is inaccurate. It is not a complete set of flagship cards for a given year. The flagship series includes not only Series 1 and Series 2. It is topped off by Topps Update (or, in the past, Topps traded). However, that release is not included in the Factory Set format. So keep that in mind when you decide to buy-in.

This year, Topps will release three versions of the Factory Set. Each contains the complete Series 1 and Series 2 checklist. But they each differ in the parallels available. In addition, the Montgomery Club set also has slightly different base cards.

If you expect new sets this year, prepare yourself for disappointment. Last year included the 2021 Topps Baseball Complete Set Employee Edition Factory Box. There was also a Target and Walmart exclusive version to enjoy.

In addition, the 2021 Topps Baseball Factory Set came in a blue, green, teal, and purple box. Each had different parallels.

This year Topps has pared their offering down. They only offer three basic releases. Unfortunately, it does not appear more will be forthcoming. Perhaps sales last year were disappointing.

Here are the full details on all three versions. 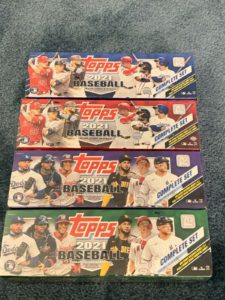 Last year the factory set came in a variety of colors. Look for 2021 Topps Baseball box sets on eBay.

The hobby version includes five exclusive Foilboard parallels. Each one has a unique serial number. The rookies represented in these parallels are:

The retail version includes the entire 640-card checklist of Series Topps 2022 Series 1 and Series 2. In addition, it features a 5-card pack per box, featuring photo variation cards of:

The Montgomery Club complete sets tend to hold a higher value. Look for one on eBay.

The problem with Topps Baseball Factory Set value is overprinting. Series 1, in particular, has been wildly overprinted in recent years. That means collectors are pretty sick of these cards by the time the Factory Set comes along. Unfortunately, it also means they are unlikely to retain their value over time.

Let’s see how the sets have retained value in recent years. As a point of comparison, we also have the top rookies on this list. All comparisons are for the main hobby set:

As always, we can see that the rookie class matters in determining the long-term value of the box. The stacked classes of 2019 and 2018 stand tall here, rightfully so.

However, there is something else going on here. The rookie class of 2020 was very strong. Bichette, Alvarez, and Robert are all potential perennial All-Stars. They are not quite the class of 2019 but compare favorably with most years. Despite that, the value fell precipitously in 2020 to about a third of its value.

Why? Two reasons come to mind. Both over-printing and the decline of the base card have taken their toll. These processes have made the complete set less desirable. The weaker 2021 class continued that trend. Despite the presence of Wander Franco, I don’t see 20222 reversing the trend.

What Will The 2022 Topps Baseball Factory Set Value Be?

The rookie class this year has some clear standouts. Although a bit forgotten amongst all the players promoted since Wander Franco is still at the top of the heap. He headlined the Series 1 rookies and had no real competition for the top chase.

Series 2 could have included several blockbuster rookies. For example, Spencer Torkelson, Bobby Witt Jr., and Julio Rodriguez were called up this year. However, none of them are on the checklist. Therefore, they may or may not be included in the Update. But either way, that will not affect the 2022 Topps Baseball Factory Set class.

But the list has depth. Vidal Brujan, Gavin Sheets, Brandon March, Oneil Cruz, and Josh Lowe are all potential All-Stars. 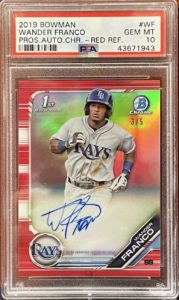 Is Wander enough to make the class of 2022 a long-term hold? Look for his autos on eBay.

The jury is out on the class of 2022. Worst case scenario, Wander turns into a good player, not a superstar. Meanwhile, none of the other prospects become standouts. On the other hand, if Wander and one other player become legends, this will be remembered as a strong year.

No matter what happens, for the reasons we already listed, don’t expect a Factory Set to be a strong hold. On the other hand, if you buy a box of this class, expect it to retain value. Not much more than that. The one possible exception is the Montgomery Club version. But that will only have substantial value if the rookie class pans out.